WHAT IS MOLECULAR HYDROGEN?

Hydrogen is an element with one proton and one electron; it’s the simplest and smallest element in the known universe. Helium is created through the fusion of hydrogen. Hydrogen and helium together account for 99.9 % of all matter in the universe.

“Have you ever wondered how the simplest and smallest element in the known universe could lead to a brighter, more intellectual, and healthier way of living?” (5)

In 1975, Dole et al. reported the possible application of hyperbaric hydrogen therapy in the treatment of cancer (6). More than 20 years later, Shirahata et al. (1997) reported a possibility of molecular hydrogen acting as a scavenger of reactive oxygen species (7). Another decade past, Ohsawa et al. (2007) reported in a prestigious medical journal, Nature Medicine, that molecular hydrogen might act as a selective antioxidant (8)

Since the landmark article of Ohsawa et al. (2007), more than 500 original and review articles on the potential therapeutic benefits of molecular hydrogen have been published in medical journals (9). 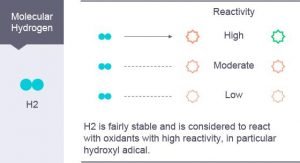 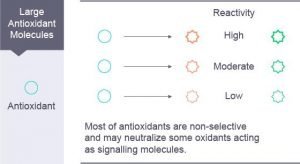 Molecular hydrogen is inert and, as mentioned above, is unlikely to react with ROS and RNS with low reactivity, which plays an important role in physiological functions as signalling molecules. 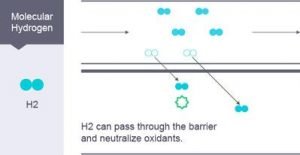 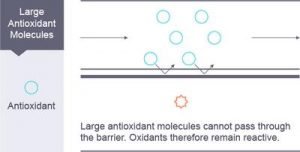 Use in Deep Diving

Hydrogen gas has safely been used in deep diving. The first report dates back to 1945 – by the Swedish engineer, Arne Zetterstrom. It was a mixture of oxygen and hydrogen gases, known as Hydrox. In late 1960’s, the United States Navy and the Compagnie Maritime d’Expertises of France also started testing the use of high-concentration hydrogen gas (up to 49%) in dives as deep as 700 m (11).

The health safety of molecular hydrogen has been discussed based on facts that the human gastrointestinal tract harbours trillions of microbes, namely the gut microbiota, and that molecular hydrogen is amongst the common biological gases produced by the gut microbiota – other common gasses being oxygen, nitrogen, carbon dioxide, methane and hydrogen. This is a long-accepted fact and constitutes the principle of the breath hydrogen test – a test to determine small intestinal bacterial overgrowth (12, 13, 14).